Well, this post is long overdue. And finally, here is a post about cupcakes on a cupcake blog. My friend Jaime and I had been talking about having a cupcake baking night since May. Finally, in August, we had that baking night and made churro cupcakes. Continue the three month delay trend, here is the post.

These cinnamon spiced vanilla cupcakes with a homemade churro topping were a hit. We made two dozen of them, and they were all gone within two hours of bringing them to work. It was a ton of fun making them, especially the churro topping. The cake is a cinnamon-spiced cake, and we decided to further spice it up with a hint of coffee extract. Wow, did that make a difference!

The churros first seemed a little daunting. You could use fry up some frozen churros, but fear not, homemade ones are super easy to make! All you have to do is mix a few ingredients and pipe it into a deep fryer (or a frying pan will suffice). You are supposed to pipe the dough into the oil using a piping bag to get the texture, but a scooping it in with a spoon works too. After they cool, load ’em up with some cinnamon sugar, and even some chocolate! Ooh, I wish we had some done that.What a sugar high that would be! Maybe next time…

1. In a small bowl, whisk together the flour, baking powder, baking soda, cinnamon and salt.
2. In a small bowl, combine the buttermilk, vanilla extract, and coffee extract.
3. In a large bowl, cream the butter and sugar until light and fluffy.
4. Add the eggs to the butter mixture at a time.
5. Add the flour mixture and the liquids alternately, beating well after each addition. Consistency should be similar to a pudding.
6. Fill the cupcake linings about 2/3 full
7. Bake the cakes at 325F for about 17-19 minutes or until a toothpick comes out clean.

1. Whip the butter until it is light and fluffy.
2. Mix in the liquids, cinnamon, and confectioner’s sugar until it is at a desired consistency.

1. In a small saucepan over medium heat, combine the sugar, water, salt, and oil. Bring to a boil and remove from the heat. Then stir in the flour until it forms a ball.
2. Heat the frying oil and then pipe in the dough using a pastry bag.
*Note, we did spoonfuls of the dough without any issues.
3. Combine the cinnamon and the sugar to dip the churros in the mixture. 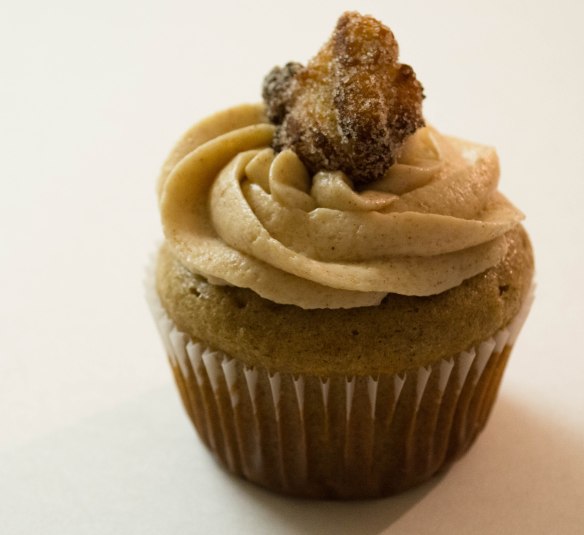