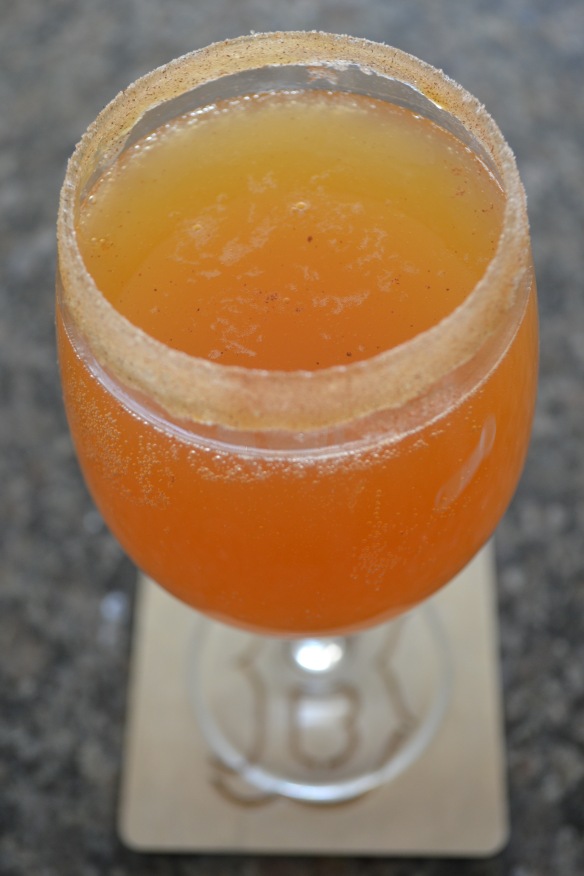 For every Thanksgiving feast, I always make desserts (surprise, surprise). I last posted about the triple chocolate cake pops. What I didn’t tell you was that I took off from work to spend the day baking. And what makes holiday baking even better? A glass (or two) of an apple cider mimosa. What else are you going to do when you are waiting for the cake to cool other than sip on this easy to make tasty beverage?

1. Dip the rim of your glass in the caramel sauce (or water).
2. Dip the rim of the glass into the cinnamon sugar.
3. Pour in a glass 1 part sparkling wine to 1 part apple cider.

Would you believe it? It’s Thanksgiving weekend and almost December. I can’t believe how the year had gone by so quickly. Given the time of year, it’s prefect for the cupcake of the week: hard cider cupcakes! So what exactly do I mean, you might ask? This cupcake is an apple cider cupcake with a cinnamon whiskey buttercream. And yes, it’s as good as it sounds.

There of course is a back story behind each cupcake I make. For this one, I need to thank Janie and Denise for the idea and also sharing the Buzzfeed post about cupcakes that “will get you drunk.” After doing the math, unless you want/can eat at a minimum 30 cupcakes, there is no possible way to get drunk off these cupcakes. Nonetheless, these were really fun to make and scrumptious desserts at Thanksgiving dinner yesterday.

I based the recipe off one of the Buzzfeed recipes but ended up adding a lot more spices and ingredients to make the cake flavorful and fluffy. In the cake, I also used spiced apple cider from Trader Joe’s rather than traditional apple cider, which I imagine would be just as delicious.

While I normally am not a fan of frosting, this cinnamon whiskey buttercream was really delicious. The whiskey provided a nice kick to the sweet cinnamon vanilla. I ended up adding a dash of salt as well to “cut” the strength of the whiskey.

Overall, the cupcake was delicious and a hit at Thanksgiving, and I loved pairing it with some hot apple cider as well. Enjoy!

1. In a small bowl, whisk together the flour, baking soda, baking powder, salt, cinnamon, nutmeg, and cardamom.
2. In a medium bowl, combine the buttermilk and vanilla extract.
3. In a large bowl, cream the butter and sugar until light and fluffy.
4. Add the eggs to the mixture one at a time.
5. Add the flour mixture and the liquids alternately, beating well after each addition.
6. Fold in the apple cider and sour cream.
7. Fill 15 cupcake liners about 2/3 full.
8. Bake at 325F for about 20 minutes or until a toothpick comes out clean.

1. Whip the butter until it is light and fluffy.
2. Mix in the liquids, cinnamon, and confectioner’s sugar until it is at a desired consistency.

This week it finally begins to feel like autumn. I think it was the first time I actually felt cold this October. But what better thing is there to do other than stay inside bake some goodies and drink hot apple cider? I contend, again, that autumn is the most delicious season of all–and it finally feels like it.

This week I wasn’t exactly sure what type of cupcakes to make and started to troll Pinterest (where else?) and found a nice recipe for apple maple cupcakes. The cake was a delicious and easy to make. After the pumpkin cupcake incident, I was wary of putting too much apple in. However, by using two medium sized Macintosh apples from Trader Joe’s, the apple provided a nice moisture to the overall cake. I liked this cake because it wasn’t too sweet, as the maple (with peanut butter) frosting was a bit on the sweeter side.

Honestly, I had a bit of trouble with the maple frosting. When you make a buttercream, you add confectioner’s sugar to thicken the frosting. But when you add maple syrup on top of the normal amount of sugar, you may end up having to schedule a visit to the dentist’s office. While I knew that, I still put too much maple syrup in the frosting, making the butter a strange sticky concoction. It looked as if the frosting would fall off, but the maple syrup acted like glue. To thicken it without putting too much sugar, I dropped in a glob of peanut butter. The peanut butter immediately thickened the mixture and added a slight savory flavor to the sweet frosting.

Ultimately, the cake and the frosting were really delicious and basically have been getting me through midterm season. If you are not currently considering moving your bed to a library, then I’m sure that these are best enjoyed along some simmering mulled wine or spiced apple cider while relaxing on comfy couches.

1. In a small bowl, whisk together the flour, baking soda, baking powder, salt, cinnamon, and ginger.
2. In a medium bowl, combine the buttermilk and vanilla extract.
3. In a large bowl, cream the butter and sugar until light and fluffy.
4. Add the eggs to the mixture one at a time.
5. Add the flour mixture and the liquids alternately, beating well after each addition.
6. Fold in the apples.
7. Fill 16 cupcake liners about 2/3 full.
8. Bake at 350F for about 18 minutes or until a toothpick comes out clean.

1. Whip the butter until it is light and fluffy.
2. Mix in the liquids, peanut butter, and confectioner’s sugar until it is at a desired consistency. 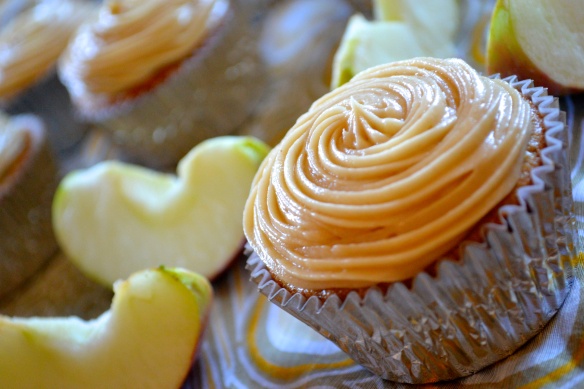